Still Open All Hours at Christmas

This week has been a week of extremes.  The mornings have been very foggy and damp, yet the afternoons have been gloriously sunny and warm.  The kind of afternoons we could have used more of during August when we were struggling to get the combine going to harvest the cereal crops.

So it seems that we are having an ‘Indian Summer’ and along side the second cut of grass we are taking to make winter fodder for the cattle, we are busy drilling next year’s cereals and shifting our focus onto selling Christmas Trees. 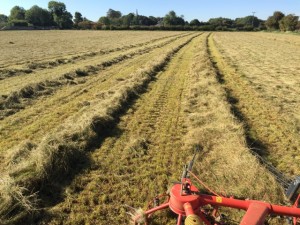 Making haylage for the cattle in winter.

he coming festive season and large Christmas Trees are also selling fast as local councils and larger institutions start planning for Christmas, but they are not the only ones.

This week we have cut Christmas trees for two customers for reasons that could not be further apart.  The first trees, some large spruce at 12ft have gone to the BBC comedy show ‘Still Open All Hours’ which is filmed on location in Doncaster – not far from us.  However we will also be cutting more trees for them to take down to London in the coming weeks for further filming for the Christmas Special.

At the other end of the spectrum, we have cut a number of 5ft trees for a customer of our that uses them to build 3 day event courses for horse jumping.  As I said, a week of extremes.

What has your week been like I wonder? Have you started to think about Christmas and Christmas Trees, Christmas presents, who’s cooking Christmas lunch, or are you fighting the inevitable and basking in the last, lingering days of autumn sunshine? Given the choice, I’d be tempted to do the latter :)