Once you receive your Christmas Tree you want to ensure it stays beautiful throughout the festive period. Therefore, please consider the following points;


When you receive your living Christmas Tree, You need to decide if you want to take it indoors or if it will remain outside. Either way it can be decorated and enjoyed by all. 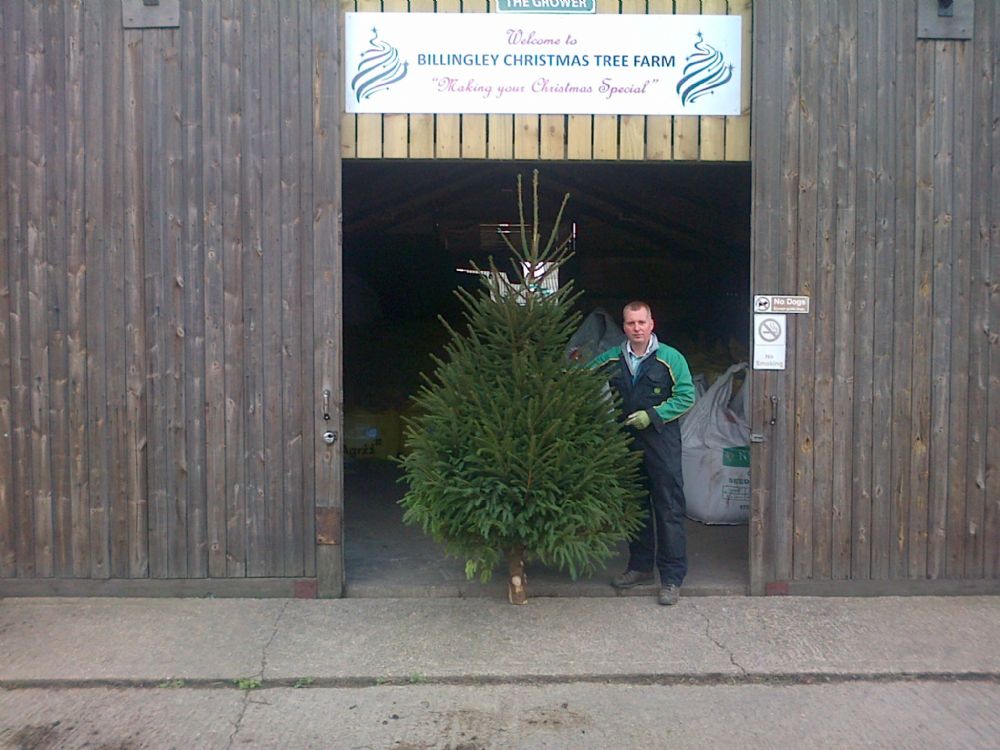 Well it’s a beautiful, autumn morning and Andrew has a full day ahead of him drilling wheat for next year’s arable harvest. However, before that, he has been busy cutting a tree down early this morning. This fabulous Norway Spruce measures in at over 8ft and is being sent out today to become a media star!! This Christmas tree is going to appear in the Christmas advertising campaign for Waitrose. We can’t wait to see it all dressed up in its ‘Sunday best’.
Here at The Christmas Tree Farm, we pride ourselves on sending out beautiful Christmas Trees to all our customers and our ability to provide trees all year round has brought us a good following in media circles. Those of you who have been with us for a long time will be aware that we have supplied trees in the past for many big names, including Morrisons, Marks and Spencer, Tesco, The White Company, Annabel Karmen, Ministry of Sound and Doctor Who.
If you are looking for a Christmas Tree either in or out of season, please give us a call. We are happy to help. You can also follow us on Facebook www.facebook.com/TheChristmasTreeFarm and Twitter @TCTF to make sure you get all the latest news from the farm. This is particularly good for customers who may want trees in the summer period when they are growing as it allows you to keep up to date with their growth stage to ensure you time your photo shoots for when the trees are at their best.
For all our regular followers, may I apologise for the lack of posts in the last few weeks, it has been an extremely busy time for us and we have been visiting all our plantations to ensure that the trees are looking as we want them to as we prepare for the build up to Christmas.
On a positive note I have lots of pictures to share with you over the coming weeks, if you have any pictures of your decorated trees from Christmas you would like to share with us, please email them over. It would be great to see where the trees end up and what they look like dressed up.
And the shop is now open! 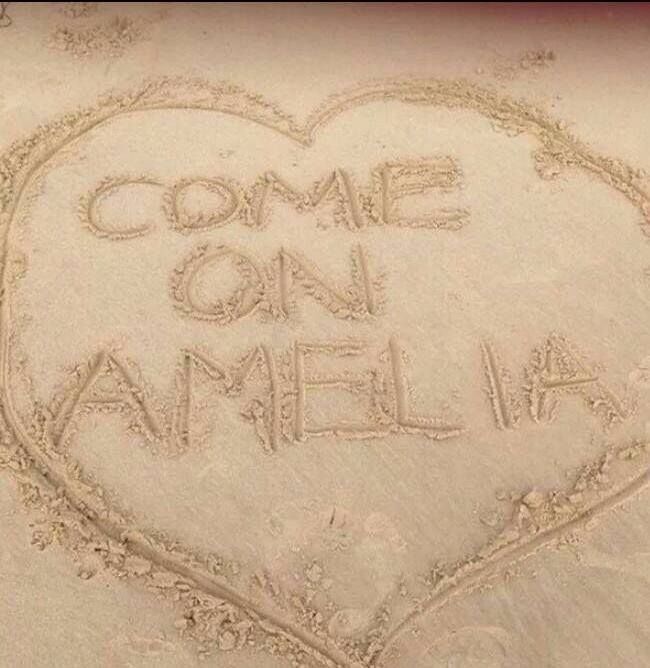 Introducing our charity of choice for 2013 – Heart-Link – Glenfield
As most of you know, each year we choose a charity to support both from The Christmas Tree Farm and Billingley Christmas Trees Ltd.  This year we have chosen a small, special charity called Heart Link which is based in Glenfield Hospital in Leicester.  You can read more at their website https://www.heartlink-glenfield.org.uk/
If you are wondering why we have chosen this charity, then let me explain:
It all stems from a special little girl called Amelia Rose
Amelia  is 2 years old and lives in Doncaster with her parents and her little brother Max who is 1.  She was born with Downs Syndrome and a heart problem.  She is a beautiful, happy little girl and her mummy is a good friend of ours.
Ameila went into hospital in September for major heart surgery.  The surgery was not as successful as they’d hoped and Amelia has remained in Glenfield hospital since and undergone many further surgical procedures, including more major heart surgery.  She is currently fighting for her life, and what a little fighter she is proving to be by getting this far.
Whilst Amelia is in hospital, her parents are having to travel backwards and forwards from Doncaster in turn as Max needs looking after at home.  The costs of travel and parking are an extra worry at an already horrendous time.  This charity helps families in this situation and in honour of Amelia we have chosen to support it this year.
If this story touches your heart as you think of you own children and grandchildren, nieces and nephews, then we have set up a special promotion code HEART.  Enter this at the checkout when ordering your Christmas trees online and we will donate to Heart-Link.
We will also be collecting for the charity in the retail site at Billingley.  Please follow us on Facebook and Twitter @TCTF where we will keep you upt to date with Amelia’s progress as well  as the usual info about Christmas Trees.

This week has seen the local Newspaper, the Barnsley Chronicle, taking an interest in what happens on the Christmas Tree Farm during the summer months.  As well as our long distance customers, The Christmas Tree Farm at Billingley has captured the imagination of the local people who enjoy the experience of being able to come up and choose their tree during the festive period.  This truly is a great way to start Christmas, the festive atmosphere, the family of reindeer, the plantations of Nordman Firs and Norway Spruce surrounding the retail site – which for 11 months of the year acts as a grain store – there is nothing better, and the kids love it too!
Our local newspapers and radio stations have also taken a welcome interest in our development since day one. They are secure in the knowledge that there is always some news for a festive story at Christmas, however, they have this year also acknowledged that work goes on all year round and have come to visit us to see what happens during the summer months.  This is great publicity for us of course, but also helps customers to understand what goes into growing a great Christmas Tree.
You’d be surprised how many people have no idea that it takes so long and so much work to get a Christmas Tree to the right shape and size for the public demand.
The paper has also taken an interest in the local council’s proposals to take half of the land we farm on a long term tenancy to change it from green belt to an industrial estate.  Not quite sure where that will leave us, but it isn’t going to have a positive impact!  That issue however, is completely out of our hands…….
So on a more positive note, please enjoy reading the exerts from the paper and know that we are dedicated to growing fabulous Christmas Trees to help make your Christmas special. 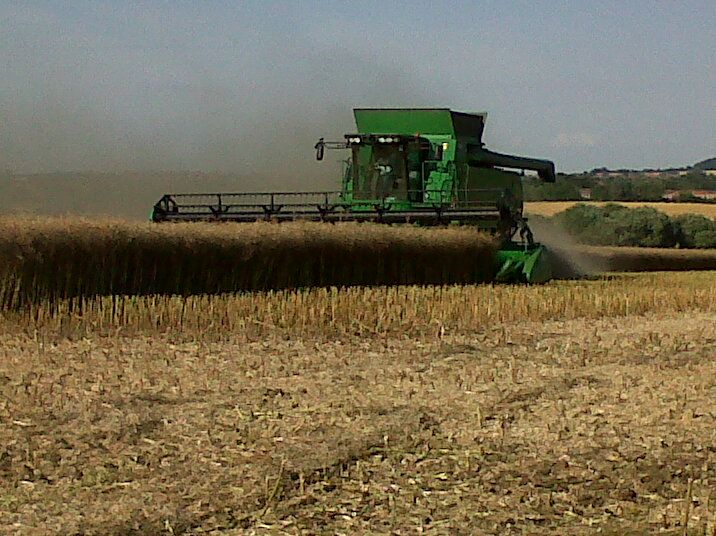 I said  I’d keep you up to date with the other things we were doing apart from Christmas Tree work.  Well this time of year is completely hectic with the cereal harvest.  Here at The Christmas Tree Farm in Billingley, we farm approximately 1000 acres, made up of the main farmstead on a long term tenancy and then several hundred acres on short term tenancies or on contract farming agreements.
The majority of land is assigned to arable farming where we concentrate primarily on wheat and oilseed rape with some barley and occasionally some beans.  When the crops are ready to be harvested, there is a short window of opportunity to combine the crop and store the grain, before the crop starts to deteriorate.  As farmers, we are at the mercy of the weather and crops can only be harvested at the appropriate moisture levels.  That means each crop has a sample of grain tested for moisture content before the combine will begin its work.  Any rain increases the moisture levels and makes the straw hard to cut.  Therefore the crop can only be harvested when it is dry.  Furthermore, timeliness of harvest ensures that the crop for the following year can be established in the ground at the optimum time.  As you can see, this is a high pressure time of year.
Andrew will spend 9 to 10 hours each day on the combine and weekends do not exist.  From an eight o’clock start on the farm, he does not finish his day until approximately 9pm, although this varies and can be earlier or later dependant on the season and the weather forecast.  He likens it to a 9 hour flight each day, not even stopping for lunch on most days.  Needless to say, this is not his favourite time of year, although the children love it, taking dad drinks and eats down to the combine and hopefully getting chance to have a sit in the passenger seat!  I must confess to also having a soft spot for harvest, the smell of the wheat and straw stirs up childhood memories for me, however cooking dinner at 9.30 at night is not always something I relish.
The attached pictures show our combine in action from outside and from within, looking through the windscreen, when harvesting oilseed rape – for oil to cook your chips in!